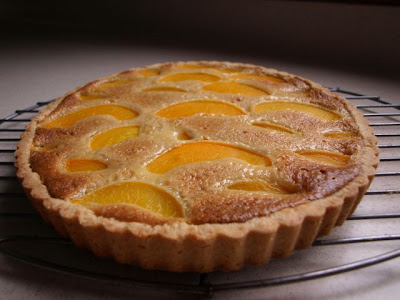 Wow, so many tart recipes as we come down the home stretch with Tuesdays with Dorie. Does that mean folks are scared of tarts? With their sugar cookie-like shell, I’ve found tarts to be much easier than pie.

I opted for canned peaches in my tart rather than figs, since figs are not to be found in stores right now.

I really loved how it looked with the peaches and the shiny nougaty-looking filling. 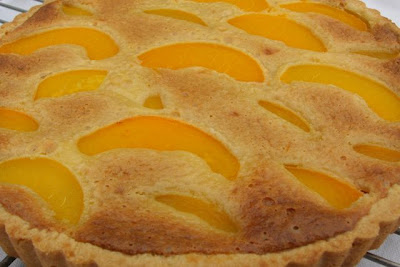 Sadly, my tart wasn’t baked through in the middle, even after 40 minutes in the oven. We managed to munch around the outer circle, though. The overwhelming flavor in this tart was honey, with the peaches and almond taking a supporting role. If I were to bake this again, I might cut the honey by half, only because I’m a huge fan of peaches.

I’m also playing catchup from last week. I made both the Sour Cream Pumpkin Tart and the Normandy Apple Tart that Judy of Judy’s Gross Eats and Tracey of Tracey’s Culinary Adventures chose. As you can see, I only managed to photograph the apple tart. 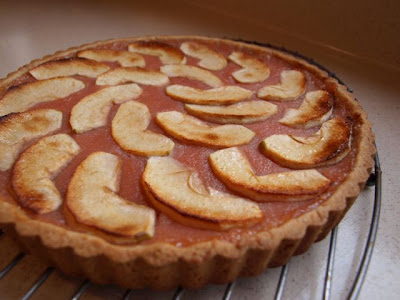 This was a really tasty tart, with a homemade applesauce making up the bulk of the filling. The rosy color came from cooking the apple peels with the filling before straining them out. This was a big hit with the family.

I served the pumpkin tart at Thanksgiving and it was a bit hit too. The filling was a perfectly textured pumpkin flavor, just what you’d expect for the star of the Thanksgiving dessert table.

As a side note, I thought I’d mention that I didn’t prebake any of the shells and they came out fine. I find that the edges of the shells come out too dark for my tastes if I prebake.

OK, that’s it for now. The next few weeks will highlight the final recipes from Dorie Greenspan’s outstanding book “Baking, From my Home to Yours”. You can find the tart recipes in her book or at the recipe links above.