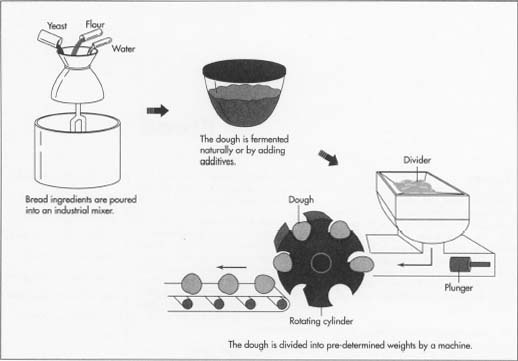 Wheat and barley were two of the earliest plants to be cultivated, and primitive people living as early as 5000 B.C. are known to have eaten these grains. Eventually it was discovered that adding water to the grain made it more palatable, and people experimented with cooking the grain and water mixture on stones that had been heated in a fire. In this manner, porridge and flat breads were developed.

The ancient Egyptians were known to grow barley and wheat. Excavations of their cities revealed that they enjoyed flat breads with nearly every meal. It is likely that leavened, or raised, bread was discovered accidentally when a wheat and water mixture was left in a warm place, causing the naturally occurring yeast to produce a puffed-up dough. It is also possible that a piece of leftover dough was mixed into a new batch, producing the same results.

Cooking the dough in an oven over an open fire produced an even better grade of bread. The first ovens were clay structures in which a wood fire was burned. When the wood had completely burned, the ashes were scooped out from an opening on the side of the oven. The wheat dough was placed inside the oven and then the opening was sealed. By the time the oven had cooled, the bread was baked.

The Romans are credited with inventing grinding methods by rubbing grain between two stones. Eventually, the manual grinding process was replaced by a mechanical one in which one stone revolved on top of a lower, perpendicular and stationary stone. In the beginning, the wheel stones were driven by cattle or slaves. Later, water mills or windmills provided the power.

Grinding was a time-consuming process and for centuries, leavened bread remained a pleasure reserved for the wealthy. White bread was an even rarer commodity. In fact, a family’s social and economic status could be determined by the type of bread they ate. The poorest families ate the dark whole-grain bread. Ironically, nutritionists today favor whole-grain breads over those made with white flour.

Bread making remained primarily a home-based function well into the Middle Ages. About that time, some families, particularly those without ovens of their own, began to take their dough to small local bakeries to have the dough shaped and baked. As towns and villages sprang up throughout the countryside, bakeries flourished and home baking decreased significantly. These local bakeries had large brick ovens heated by wood or coal. The dough was moved in and out of the ovens with a long-handled wooden shovel called a “peel.” Many small, independent bakeries still employ peel ovens although they have since been converted to use gas or oil fuel.

In the late 18th century, a Swiss miller invented a steel roller mechanism that simplified the grinding process and led to the mass production of white flour. Charles Fleischmann’s development of an easy-to-use, dependable packaged yeast later further simplified the baking process. During the 20th century, scientific and technical innovations have made it possible for large bread factories to control the complex physical, chemical, and biological changes inherent in

bread making. High-speed machinery can now accomplish the kneading and ripening processes in a matter of seconds.

For some time, bread was thought to be fattening, and many people avoided it in their daily diet. Studies showed, however, that it was toppings such as butter that accounted for most of the fat-induced calories. In fact, bread is an excellent source of low-fat, complex carbohydrates. The renewed interest in bread has led to consumers’ taste for a variety of bread types. No longer is sliced white bread the norm. Grocery store shelves now offer myriad wheat breads and multigrain breads.

Bread is made with three basic ingredients: grain, water, and bakers’ yeast. The harvested grain is ground according to the type of bread being made. All grains are composed of three parts: bran (the hard outer layer), germ (the reproductive component), and endosperm (the soft inner core). All three parts are ground together to make whole wheat and rye breads. To make white flour, the bran and the germ must be removed. Since bran and germ contain much of the nutrients in grain, the white flour is often “enriched” with vitamins and minerals. Some white flour has also been fortified with fiber and calcium.

The grinding takes place at grain mills, which sell the grain to bakeries in bulk. The bakeries keep the grains in storage sacks until they are ready to be used. In the baking factory, water and yeast are mixed with the flour to make dough. Additional ingredients such as salt, fat, sugar, honey, raisins and nuts are also added in the factory.

Mixing and kneading the dough

Moisture content is particularly critical. A ratio of 12 to 14% is ideal for the prevention of bacteria growth. However, freshly baked breads have a moisture content as high as 40%. Therefore it is imperative that the bakery plants be kept scrupulously clean. The use of fungicides and ultraviolet light are two popular practices.

Where To Learn More